The closing decades of the 1800’s saw a burst of interest in both early American history and in lineage societies dedicated to recognizing the important role played by the members’ ancestors in the founding of the United States. The Society of Colonial Wars in the Commonwealth of Virginia was founded on June 28, 1894 to commemorate the role of Americans from Virginia who served in the military and in high civil positions during the colonial period. 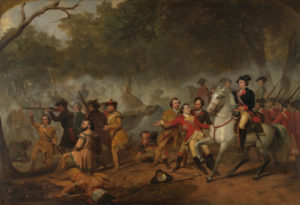 Above: Colonel George Washington takes over command from the dying General Braddock, at the Battle of the Monongahela (Braddock’s Defeat), July 9, 1755

“By the all-powerful dispensations of Providence, I have been protected beyond all human probability or expectation; for I had four bullets through my coat, and two horses shot under me, yet [I] escaped unhurt, although death was leveling my companions on every side of me”. – George Washington