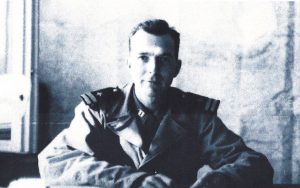 According to his membership application he was a Manufacturer of Cotton Textiles in Burlington, NC. Was elected a member of the Virginia Society on May 10, 1939 by right of his direct descent from Captain Farnefold Green who was killed by the Tuscarora Indians in 1714 in Bath County, NC during the Tuscarora War. His Virginia Number is 232 and his General Society number is 9554. The North Carolina Society wasn’t formed until 1949. Green graduated from The University of the South in 1930.

When WWII started Holt tried to join the army but was declared physically unfit. He was later accepted by the Navy.

Shortly after the Slovak uprising in August 1944, the Czech Intelligence Service in London learned the location of several British and American flyers that had recently been liberated from German POW camps in Slovakia. They were with the Czech Forces of the Interior (CFI)—a group of partisans—who were defending a liberated area against the Germans. This information was forwarded to the Office of Strategic Services (OSS—the forerunner of the CIA) in London. A decision was made to send teams of agents into Slovakia to evacuate the downed airmen, provide supplies to the partisans and gather intelligence. These were to be the first OSS units to operate in central Europe.

On September 17th two B-17s with fighters from the 15th air force landed at a secret air base in CFI territory. The planes stayed on the ground for less than an hour, rescuing 17 flyers and dropping two OSS teams.

The first group of agents, known as the “Dawes” team, comprised of intelligence officers, weapons and demolitions experts and a radio operator. 35-year-old Lt. James Holt Green was its commander.

The Dawes team was dispatched as a liaison group to the CFI with the assignment of transmitting intelligence and situational reports on the progress of the campaign, as well as estimating arms, ammunition, and demolition requirements for further resupply of the Czech forces. Three additional OSS teams were sent in on October 7.

By the end of October, the situation began to deteriorate as the organized resistance began to falter and Green wanted to fly out a group of airmen, as well as several members of his team. This flight was scheduled for October 18th but had to be postponed due to constant bad weather. This proved to be a death sentence.

The OSS’s concern for these teams was evident in the message to Green on October 25 stressing that their security was “vital” and urging him to do everything possible to ensure the safety of the party. Green’s options were running out and to make matters worse, their airstrip was soon bombed by the Germans.

Green decided to evacuate the camp. He divided his men into four units, and they retreated with the CFI in the direction of the Russian lines. On the long arduous march, many Czech soldiers and Americans became ill from lack of food and exposure.

A week later and already surviving an attack by the Germans, Green’s group, after almost nine days of marching in the bitter cold through the mountains, stopped at a farmhouse on the outskirts of a small village. On the following day they traveled to a nearby mine camp where sympathetic nurses dressed their feet. The Germans would later capture and kill these nurses.

Green and his men lived on the mountainside not far from the Czech Brigade’s headquarters from November 18-30. During that time, Green contacted Major Sehmer of the British mission and went to Polomka to send a message to the OSS in early December.

The OSS had not received any messages from any of the teams since the end of October. The last message from the Dawes team, though badly garbled, was interpreted as follows:
“Thirty of our groups and wilsh (sic) now in estate near Dalnialsheta [illegible] southeast Brezno. No news Baranski, Novak and Pavletich. McGregor, Lain and John Krizan [cover name of John Schwartz] with flyers whereabouts unknown since separation Nov. 10th. All equipment lost. Majority in bad condition because exposure, frozen feet, exhaustion from long mountain marches and starvation diet. Drop soonest to Sehmer complete extra heavy clo….”

By then, the net had begun to close around the agents. On December 9 and 12th, a total of five more were captured. The rest of the group stayed in the mountains for the next three weeks, most of them living in a shack about three hours north of Polomka and the remainder at a winter resort hotel at a place known as “Velky Bok.” On Christmas Eve, the British and Americans held a party with religious services at the shack. The next morning the men were washing their clothes when they came under attack and were surrounded and taken prisoner by the Germans. Unaware of what had happened to the agents, a final attempt was made to resupply the OSS teams on December 27th. The pilot flew off course, however, and missed the target.

Green and his fellow POWs were severely tortured during their interrogations. On January 26th, when the Germans were satisfied they had elicited all the information they could, the POWs were told to remove their uniforms and put on prisoners’ uniforms; then they were marched out.

The Americans were unaware they were going to be executed, according to a Polish prisoner who was in Mauthausen at the time. The signs on the door they entered said they were going to the bath. “After they undressed, they went to another room where Green and eleven others were shot. Their bodies were then cremated. Today His remains are at a US military cemetery in France.
Green was posthumously awarded the “Distinguished Service Cross”, Prisoner Of War Medal. Distinguished Service Cross Citation reads:

The President of the United States of America, authorized by Act of Congress, July 9, 1918, takes pride in presenting the Distinguished Service Cross (Posthumously) to Lieutenant James Holt Green (NSN: 0-246370), United States Naval Reserve, for extraordinary heroism in connection with military operations against an armed enemy while serving with Company B, 2677th Regiment, Office of Strategic Services, in action against enemy forces from 17 September 1944 to 26 December 1944.

With full knowledge of the extreme hazards involved, Lieutenant Green volunteered for an intelligence mission into the heart of enemy-occupied Czechoslovakia.

As the mission’s commanding officer, he was instrumental in obtaining military information of great value to the Allied cause, and in affecting the rescue and evacuation of a large number of downed Allied airmen.

Until deterioration of the fighting front in Czechoslovakia rendered further operations impractical, the group under his resourceful guidance operated successfully behind enemy lines for several weeks under conditions of utmost peril and hardship.

A constant flow of intelligence was transmitted to Allied authorities on such matters as the disposition and strength of enemy forces, situation reports of resistance activities, with estimates as to arms requirements for the supply of resistance forces; accurate and detailed reports on the results of Allied bombing, and designation of future bombing objectives.

Lieutenant Green, through his brilliant leadership and his courageous and efficient performance, as commanding officer of the mission, until his capture and subsequent execution by the enemy, is in keeping with the highest traditions of the Armed Services.